Comic-Con International was a lot more fun and a lot less overwhelming than usual this year.

Maybe it’s because we skipped the busiest day to go the San Diego Zoo. Maybe it’s because we picked our battles on what we tried to do. Maybe it’s because last year we crammed the whole experience into a single day, and having three days felt like a luxury in comparison. Or the fact that the logistics of getting to and from the con were so ridiculously complicated (more about that later) that they made the convention seem relaxing.

Whatever the reason, the floor did seem a bit less crowded this year. Both of us remarked on the fact that we never felt trapped as we usually feel on the busiest days.

(Skip to the photos if that’s what you want.)

Thursday was the day I spent mostly on the floor, exploring. I hit the usual haunts: DC Comics, Sideshow Collectibles, Studio Foglio. DC was really plugging their upcoming fighting game, Injustice: Gods Among Us.

Sideshow seems to be displaying more figurines (and a wider variety) every year. Their Lord of the Rings figurines are absolutely incredible. Though I’m not sure what the target audience is for the life-sized Han Solo in Carbonite or Boba Fett. I can’t see putting one of those in my living room. They also had a very cheesecaky Poison Ivy statue. I overheard someone saying they couldn’t see themselves buying it because it would be like having that lamp in A Christmas Story. At another booth I discovered that you actually can buy that lamp. 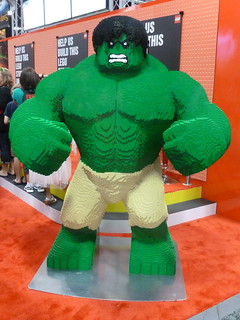 The LEGO booth, in addition to a play area for kids and life-sized LEGO statues of Darth Maul, the Hulk, Gandalf and Bilbo Baggins, had several walls covered with LEGO base boards. One was essentially paint-by-number murals. The others, wrapping around the back and sides of the booth, were open to anyone who wanted to make a design or write a message. 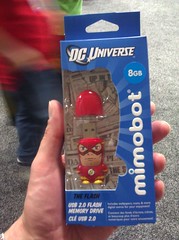 I wandered by a booth specializing in vintage comics at the time someone was (from what I could tell) getting a book appraised: Flash Comics #1 (1940). It was only the second time I’d seen one in person.

At the Mimobot booth I finally bought a real Flash drive. The guy at the booth agreed that they were a long time coming. 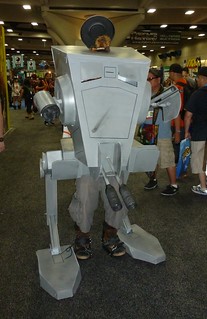 One thing that stuck with me after last year’s single-day trip was an unwillingness to wait too long in line. I’d much rather spend the time at Comic Con experiencing Comic-Con than standing or sitting for three hours. I can do that at home. That spilled over a bit into the types of panels I wanted to go to.

Watching DC tell me what comics are coming up is kind of boring. It’s like being walked through the monthly solicitation article. I did it twice, though, the first time because my feet were tired and the second time because I wanted to see if there might be something interesting about the Flash. Unfortunately, the first one ended up locking me out of a discussion on time travel that I really wanted to see. Lesson learned. 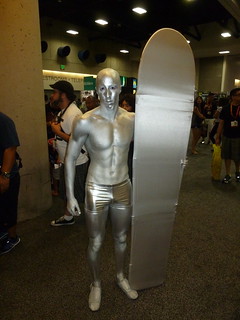 On the other hand, listening to a bunch of fantasy writers talk about how they research and how they keep track of their fictional worlds was fascinating. And I actually got some insights from the talk by a law professor about the legality of fan art.

I was frustrated that a lot of the panels I wanted to see were late in the day, and I had to skip them because I had to get on the road. That’s not the convention’s fault, though. If I’d been staying in town, it would have been fine.

My main disappointment was that I couldn’t attend the Firefly 10th Anniversary panel. I was there when Joss Whedon screened a few scenes from the pilot episode a decade ago, and I was there for the Serenity panel in 2004 (and collected some good quotes too, though the 2005 quote-slinging was better). I really wanted to be there, but the earliest I could get in line was maybe 9:30, and I figured that wouldn’t be enough. Nathan Fillion’s comment about “broken time-rock people” kept popping into my head. As it turned out, people had been camping out—in the rain—since the night before, when I was 90 miles away from the convention center. 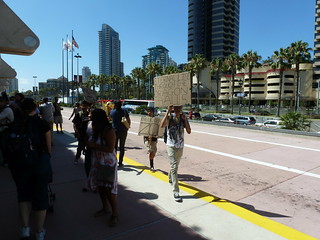 For some reason there were a bunch of religious demonstrators standing around the paths to/from the convention center with signs. They weren’t as obnoxious as Westboro (though the guy repeating “Heaven?…or Hell?” through a megaphone over and over got annoying after a while), but they seemed to be acting under the assumption that anyone celebrating pop culture must be spiritually lacking. Or maybe they just can’t tell the difference between “having fun” and “worshipping.” In any case, they were gone on Sunday, but I did see a few parody demonstrators with signs like “Kneel Before Zod.” 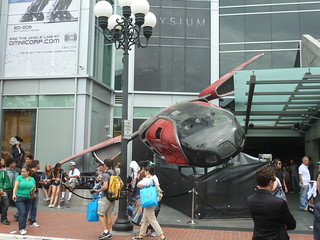 The 5th St. crush was a lot more open this year than it used to be, possibly because the convention itself has spilled even further out into the city. There were at least two mazes near the Gaslamp. Restaurants had been re-branded for the weekend. A Walking Dead obstacle course had been set up at the stadium, with a cluster of other outdoor exhibits nearby. Several hotels were hosting events as well. 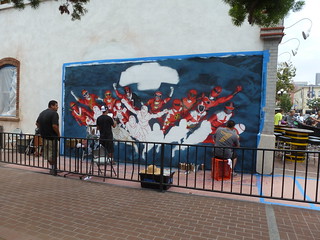 There were enough off-site events and exhibits that one of our friends was able to spend all day Friday exploring the outside con even though he didn’t have a badge for that day. With tickets so hard to get, this is a great way to handle people who could only get some days, or locals who missed the pre-sale entirely and want to see what’s going on.

Weather was more humid than most years, with occasional bouts of rain, no doubt related to the Pacific hurricanes going on, but not bakingly hot as it’s been some years. 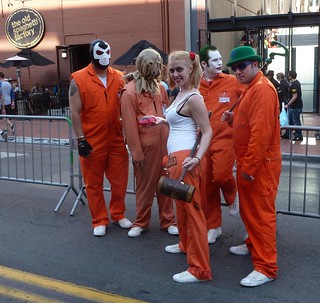 Some things I learned about San Diego:

The waitress at Royal India asked me as I was paying the check, “What’re you here for? What’s your thing at Comic Con?” I replied, “Uh, the comics actually.” “Ah, you’re one of the rare ones!” 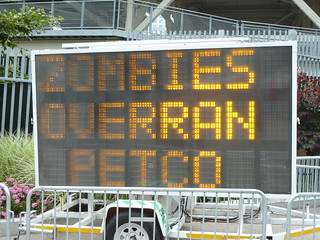 Zombies were present all over the floor, in the artwork, toys, t-shirts, costumes, collectibles, and more. I mentioned the Walking Dead Escape outside. And then there were the zombies that weren’t there. Not exactly.

One of the odd things about this con was reading San Diego 2014: The Last Stand of the California Browncoats. The novella by Mira Grant fits into her Newsflesh trilogy about a world that has recovered (mostly) from a zombie apocalypse a generation earlier.

Unlike the novels, this is set during the Rising, and tells the story of what happens when the zombie plague arrives in San Diego on Preview Night at Comic-Con. It was released the day before this year’s con, and I read about 2/3 of it on the train ride Friday morning, and the rest while waiting in line for a panel that afternoon.

Reading about Comic-Con as a deathtrap for thousands of people was very odd after spending a day at the con. And walking around the day afterward was even stranger. I kept looking at alcoves and exits, trying to figure out where the control booth was, contemplating the webcomics pavilion…and then I found myself at the Browncoats booth. It seemed like it would be a little weird to talk to people I’d just read about dying in a zombie outbreak. 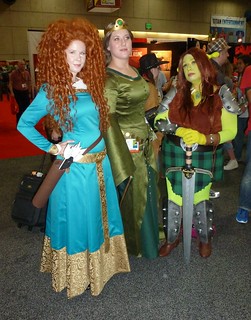 On Saturday we took a family trip to the San Diego Zoo. Things usually get craziest that day, and we were clearly not the only congoers to anticipate that and go sightseeing. I was amused near the end of the day to remember that I’d been comparing the con to a zoo for the past two days, but the actual zoo had turned out to be a much less crowded, less hectic, more relaxing experience. Sometimes metaphors just don’t quite work.

On Sunday we returned to the convention and brought our son along. In theory, Sunday is Kids’ Day, but that really only applies to kids maybe 5 and up. At 1 1/2, he’d be lucky to sit still for one 5-minute cartoon. So we took him around the floor, showed each other things we’d spotted on the earlier days, gave him a chance to look at all the people and all the stuff, and made sure to stop somewhere upstairs where he could run around and use up some energy. I think he got more out of WonderCon, because he fell asleep in his stroller. Probably just too overwhelmed.

One word of warning: People at Comic-Con, when crowd-weaving, don’t look down. So they don’t see a stroller, they see an empty space and try to walk into it. Katie figures next time we’ll tie on a helium balloon. 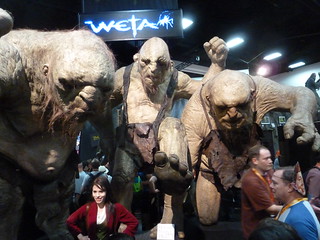 We did run into some friends Katie had met a few years ago while waiting in Hall H. Completely random, too: if we hadn’t gone to that particular exit, and hadn’t stopped at that particular bathroom, and there hadn’t been a line, we would have missed them altogether.

We wrapped up the convention with a trip to Ghirardelli (shortest line of the weekend, which was a surprise), then stopped by Heavenly Cupcake to pick up something to thank the friends and relatives who had helped us with driving, babysitting, etc. over the weekend.

Things we found in San Diego that weren’t deliberate references but had names that fit with Comic-Con thematically (now that Xavier’s is gone): 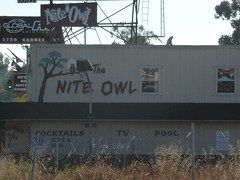 Stumbling on “Nite Owl” during the summer of Before Watchmen and “Serenity” during the 10th anniversary celebration of Firefly? Now that’s timing!

Incidentally, a few blocks past the Nite Owl is an amazing coffee place called Better Buzz. They make their signature iced drinks with a cocktail shaker. The Mint Mojito Iced Coffee was actually made with fresh muddled mint leaves. Apparently they have a branch in one of the downtown office buildings.

There and Back Again

For past cons we’ve either commuted for a single day or stayed in town for multiple days. This year we needed someone to watch J on the days we weren’t bringing him, and made arrangements with both sets of grandparents. Thursday we carpooled with a friend, and discovered that parking has become even more ridiculously expensive. Friday we took the train out and back. Saturday we drove down, which took a lot longer than it should have (confirming the superiority of not driving), and checked into a hotel, where we stayed overnight.

My plan was to aim for a hotel in Mission Valley, where we’d be near the zoo and on the convention shuttle route, but I thought I’d give the Sheraton Symphony Hall (in the northeast part of Downtown) a try. So during Hoteloween I selected it as my first choice, then ran down the list of Mission Valley hotels for the rest of them. Except that I picked the wrong Sheraton. I actually selected the Sheraton San Diego by the airport, which was pretty far out of the way for either the con or the zoo. And because no one is deliberately going after that hotel, I got it. I was annoyed for a while, but then if we hadn’t ended up there, I wouldn’t have seen this view: Check out my full set of photos.