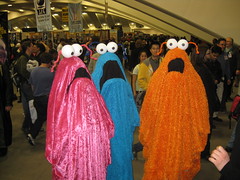 Continuing the write-up of our late-February vacation and trip to WonderCon in San Francisco, we left off with Friday at the con.

Note: If you want to skip straight to the photos, head over to my Wondercon 2009 Photo Set on Flickr.

Originally we’d planned to only go to the convention on Saturday, and pre-ordered one-day tickets. Then WonderCon published their schedule, and most of the stuff we wanted to see turned out to be on Friday. So we juggled our schedule around, and bought a second set of one-day tickets.

On the plus side, it ended up being slightly cheaper than getting three-day tickets and not using them all three days (which is what we did last year). On the minus side, it meant we had to pick up our badges twice. (I asked on Friday whether we could pick up both badges at once. We couldn’t.) 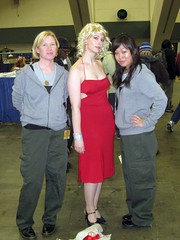 The crowds outside were slightly bigger, but I don’t think we had much of a line, since we arrived about an hour after the floor opened. The first real hint of fandom was a group of people dressed as Jedi and a pair of life-sized R2D2 robots on the mezzanine. Then another group of people dressed based on what I assume was an anime or video game. Then we were down the escalator, across the hall, and walking to pick up our badges again. 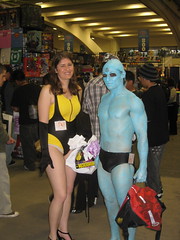 While we were still getting our badges ready, we spotted a trio of women in Battlestar Galactica costumes. Katie leaned over to me and said, “Isn’t that a Six?” and then one of us realized that the two with her were dressed as Starbuck and Boomer/Athena.

There were a lot more people in costumes on Saturday. If last year’s big theme was G.I. Joe, this year it was clearly Watchmen. I remember seeing the occasional Rorschach at cons a few years ago, but this year they seemed to be all over the place. I saw at least two Sally Jupiter/Silk Spectres as well (one with a somewhat more modest costume), at least one Comedian, a Laurie Silk Spectre and even a Doctor Manhattan (a brave soul who had painted himself blue and walked around in a bald cap and a speedo). The weird (or perhaps not so weird when you think about it) thing is: They were all based on the movie versions of the costumes.

I have a lot more cosplay photos up at my Wondercon 2009 Photo Set.

Actually, there were a lot more people on Saturday, period. I ended up skipping the DC booth swag line, because it was at least four times as long and not noticeably moving when I walked by. It was made worse by running past the gaming area and, as near as I could tell, through an area where the 501st Legion (or perhaps another Star Wars fan group) seemed to be doing photo ops. Speaking of which, it’s weird: 10 years ago, someone with a Star Wars Stormtrooper costume was impressive. These days, they’re so common that I hardly even notice them. 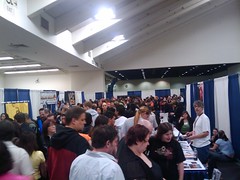 The autograph area in particular was very crowded, partly because they had big names like Mark Hamill and Carrie Fisher. I don’t think I ever had to resort to shuffling on Friday, but it happened a lot on Saturday.

In many ways, WonderCon resembles San Diego Comic-Con before it went insane. Actually, I’d recommend it for anyone who wants to attend a comic/pop culture convention in California, but has gotten sick of the crowds and the hotel rush and the lines and not being able to get into the events you want and everything that has made Comic-Con International so frustrating over the last few years.

What I did find frustrating about this year’s WonderCon, though, was that several people I would have liked to meet (or at least hear speak at a panel) ended up not coming because MegaCon was the same weekend. I’m not sure, but I suspect there was a regional divide, with most west-coast people going to San Francisco, and most east-coast people heading to Orlando, Florida instead. Ultimately I only added two signatures to Comic Book Tattoo, and no one involved with Flash: Rebirth was there at all.

The only panel I really wanted to make sure I attended was the DC Universe panel, though it was more a matter of obligation (Speed Force). It turned out to be mostly rehashing the previous day’s DC Nation panel. I will say one thing for Dan Didio: he certainly brings energy to the room for his panels. I expect I probably would have paid a lot more attention instead of using my phone to read about the scans_daily meltdown.

Katie caught a writing workshop run by David Gerrold, which she found quite helpful, and got into the giant room for Star Trek.

Now, the Esplanade Ballroom never managed to be as tough as the infamous Hall H in San Diego…but Star Trek was absolutely packed. Everyone’s seen the latest trailer by now, but it premiered at this panel, and Katie remarked afterward that it was the first trailer that made the movie actually look interesting, like it had an actual story and not just a bunch of ships blowing up. On the downside, no one asked Zoe Saldana any questions during the Q&A period — they were all directed to Chris Pine and Zachary Quinto. 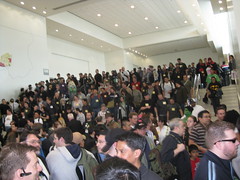 The plan, originally, was for me to catch up with the panel for 9 in the same room. I made it about halfway through, because of the crowd issue. It wasn’t that there were no seats. It was that five million people (well, it seemed like it) left the room after Star Trek, and after crossing that torrent, I had to ind the line…and trace the line to the end. That turned out to be out the front door and down along the entire side of the convention center almost to the very back. It stayed still for a few minutes, then started moving more-or-less smoothly. As I made it up to the doors, a woman handling crowd control assured us, “There’s plenty of room, they all left after Star Trek because they’re crazy.” There was no hope of figuring out where Katie was sitting (quite near the front, as it turned out, since she got to move up when so many people left between panels), so I just grabbed an empty chair near the end of an aisle. 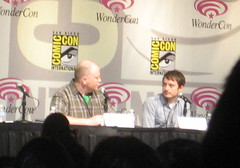 Anyway, Nine was just Elijah Wood and animation director Joe Ksander talking about making the film and occasionally showing clips. Someone asked Elijah Wood to compare his character to Frodo Baggins, and he remarked something along the lines of, “I’m going to be hearing this for the rest of my life, aren’t I?”

After 9, we met up again and did a final circuit of the floor, checking for anything either of us wanted to show the other, or anything one of us might want to pick up. We ended up at the SLG booth examining The Map of Humanity for something like 20 minutes, trying to spot all the real-life and fanciful place names and where they were located. (Hollywood showed up in about 5 places.) We bought a copy.

Then it was back to the hotel to drop off all our stuff and get ready to meet up with my brother and his fiancee for dinner. They took us to a fantastic Indian restaurant called Mehfil that was somewhat off the beaten path as far as the convention was concerned. Afterward we tried to go to a nearby pub, but it was really crowded (it was Saturday night, after all), so we started looking for another place to go. We ended up walking through the area where Wikimedia has its offices. Eventually we ended up back at a frozen yogurt place in Metreon, a shopping mall across the street from the Moscone convention center, and we hung out there until closing.