On Thursday I took the day off from work and we went to the Orange County Fair. It was a particularly bizarre visit because Costa Mesa was beneath the smoke plume from the Holy Fire (so named because it started in Holy Jim Canyon) burning in the Santa Ana mountains.

The sky, except for clear blue patches to the west and south, was a yellowish brown. The sunlight was dim and yellow. When we arrived, the entire ticket sales system was down. All the booths. All the self-serve kiosks. You couldn’t buy tickets for any of the rides, unless you could find one of the wandering cash-only ticket sellers, roaming the fair like quest-giver NPCs. We did eventually find someone who could sell us tickets. At that point, the sun emerged briefly through a break in the smoke. The deep red-orange disc was dim enough to look at comfortably, and lit up the fissures in the cloud a lurid red. Fair food keeps getting more and more outrageous. Deep fried Twinkie dogs and Zucchini Weenies have been joined by triple-decker donut burgers, chicken-in-a-waffle-on-a-stick, and the donut chicken and ice cream sandwich. But for sheer “because we can” ridiculousness: deep-fried filet mignon. What a waste. It was early evening by the time we left, and as we walked to the gate closest to where we’d parked, we saw a bright orange line in the distance. Was it the glow of the flames behind the mountain? Or the flames themselves on top of the ridge? We were too far away to tell. But that line shimmered, and we watched a deeper orange glow appear and fade behind another part of the ridge. It’s hard to be sure, but I think it might be burning in the valley between the two peaks of Saddleback. It was a late-summer heat wave, and while the picnic itself was spread out in the shade beneath some trees, it was over 100 degrees. Still, a preschooler can’t be terribly interested in his parents’ old school friends catching up, and my son kept trying to wander off to play in the hot, hot sun.

Finally, after lunch, I decided instead of bringing him back I’d go with him. On the other side of the hill we found a small concrete-lined channel, amazingly with water in it, then followed it upstream to where it opened up into a stream running through the grass. Further up we found a wooden foot bridge, and then trees closed in around it. The shade was very welcome! This second photo is looking back downstream toward the open area. Just behind me there’s a chain link fence that marks the edge of the park, and a hill leading up to the road. The stream is fed from a drainage pipe, and judging from the erosion patterns, it picks up a lot of runoff during the rainy season.

I took both shots with my phone in HDR mode to get both the light and shade areas clear. Unfortunately on the second shot it ended up blurring the leaves, since they moved just enough in the breeze between bracketed shots. It looks great on a small screen, though! 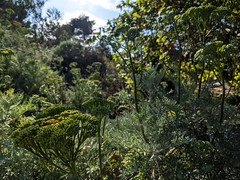 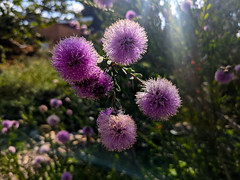