This Saturday I attended the first-ever Long Beach Comic Con. I had a great time catching panels, meeting writers and artists, talking about comics, sightseeing, and even breaking some Flash news. I can definitely see this as an annual event.

Note: If you just want to look at photos, feel free to skip to my Long Beach Comic Con 2009 photo set on Flickr. 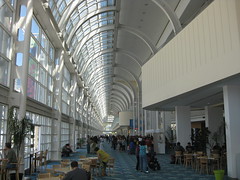 It’s been at least ten years since the last time I’d been to the Long Beach Convention Center*. I didn’t recognize the building the con was in at all (and I’m sure the shopping mall across the street wasn’t there before), though the facade and lobby reminded me a lot of the San Diego Convention Center with the arched ceiling and floor-to-roof windows. It made me wonder whether they had been designed by the same architect.

With a mall across the street to the west, Shoreline Village across a bridge to the south, and Downtown Long Beach across the street to the north — not to mention the food service in the lobby not being swamped — I really regretted having brought my lunch with me. Though it probably did save time, since I had panels I wanted to see from noon until 2:00. If I’d wanted to go to, say, the Auld Dubliner (right across the street! Auughh!), I would have only had about half an hour on the convention floor that morning.

*Not counting plays at the Terrace Theater. Though the last thing I saw there was a touring production of Miss Saigon in 2003, about two days before the start of the Iraq War. Talk about timing. 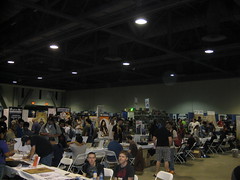 I think the main floor was about the same size as the floor at Wizard World Los Angeles the last couple of years — or rather, the amount of floor space they used was about the same. (Last year WWLA had a large empty space in the back.) Exhibitors were clustered around the entrance, mostly indie press (I remember Boom, Archaia, and Aspen) and a large Nintendo exhibit. The center of the room was dominated by the Artist’s Alley, with dealers wrapped around it and celebrities lining one wall.

In the back, inexplicably, was a raised wrestling ring. I didn’t notice it when I went through in the morning, but in the afternoon, when they were actually holding wrestling matches, it was loud! Halfway down the hall, you could hear the *smack!* *thud!* as the wrestlers threw each other to the floor. I figure the floor of the ring and the convention center floor must have made a fantastic sounding board! 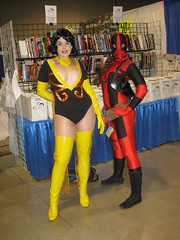 I got in about 20 minutes after the con opened for the day, so if there were any huge lines I missed them. The artists’ tables were practically empty (they came in later), and most of the action seemed to be at the publishers’ booths and dealers. There was a big line for Jim Lee, and people were lining up for Stan Lee and Berkeley Breathed signings at 11:00.

Unlike San Diego, though, I could walk around without relying on Level 18 Crowd Weaving! END_OF_DOCUMENT_TOKEN_TO_BE_REPLACED