While reading about Amazon’s purchase of GoodReads, I noticed a link to an article about e-book discovery that points out that a lot of people tend to explore multiple e-book stores. As someone who has done that, I’d like to comment on my experience.

I didn’t really start reading ebooks until I had a device I could use. I don’t like reading fiction on a desktop or laptop computer, and I don’t like reading it on a tiny phone. A couple of years back, Katie bought a Kindle 2, which is just about perfect for the base use case of reading a book from start to finish (though it’s a pain for much of anything else — I imagine the touch screen on the Paperwhite line is a huge improvement). My first serious eBook reading was on that dedicated device, which is linked to her account.

Since I bought a general-purpose tablet last summer, I’ve branched out a bit. I picked up a few books on Google Play because they gave me some store credit when I bought the Nexus 7. At the time, a local independent bookstore that I like, Mysterious Galaxy, had a deal with Google where they could get a cut of what I spent.

At the start of the year, Google Play ended their deal with IndieBound. The new choice for independent bookstores seems to be Kobo. I’ve bought a few books from there after linking my account with Mysterious Galaxy, but I still don’t like the reader app much, and the service just seems…well…pushy. I’ve har to turn off a lot of “features” in the app. I don’t want or need recommendations in my status bar, thank you very much. And I sure as heck don’t need “accomplishments” to encourage me to read more. You know what encourages me to read more? Having time to read.

The result is that between the two of us, we’ve got a small library of eBooks spread across two Kindle accounts, Google Play and Kobo…on two mutually exclusive devices. (And that’s not counting the reference books I’ve bought from O’Reilly and saved to Dropbox.)

OK, so it’s not a huge deal now, but as we buy more eBooks, it’s going to get harder to remember which book is on which account when trying to look something up or reread. We already have to discuss how to buy books that we’re both interested in reading.

I like having multiple sources to choose from. Selection, price, being able to support a third party, these are all things that you don’t necessarily get with a fully-siloed approach. But with the way eBooks are handled right now, it does add barriers to finding things.

I would prefer the way digital music purchases work: I can buy from anywhere, download a DRM-free file, and then put everything in one place. It doesn’t matter whether I bought the music from iTunes, Amazon, directly from the artist, or imported it from a CD. There’s no question of where to go when I want to listen to it. (Well, until they switch to an all-cloud-storage model, anyway. The cynical part of my brain wonders if this is the real goal behind that trend.)

On the plus side, since the libraries are searchable, and three of them are linked to the same device, it’s actually an improvement over the years we were living in a too-small apartment with 90% of our books in storage, and it was a question of finding which box they were in. 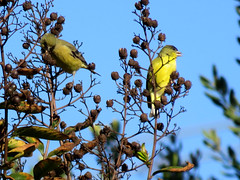