And this wraps up the daily reports! Only a month late! 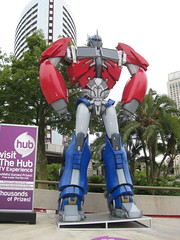 Sunday morning at Comic-Con International in San Diego. We got up early (though not as early as Katie got up on Saturday) to check out of our hotel, store our baggage, and move the car to another lot. I suspect the Sheraton would have let us keep the car there an extra day, since it was self-parking; but I’d already prepaid for Sunday through the convention, and as it turned out the other lot was cheaper anyway. Of course, since pre-paid parking was new this year, it wasn’t entirely clear what we needed to do other than leave the printout where it was visible. (More on that later.)

After eating rolls and fruit from home for most of the con, we went out to breakfast at the Broken Yolk Cafe. (I keep wanting to type Burnt Toast Diner.) They’d decorated for the convention — including thematic T-shirts on some of the servers — had good food (more varied, if not as good as Cafe 222), and were very busy, but we managed to beat the rush.

Then we walked through the streets of San Diego to the convention center one last time. 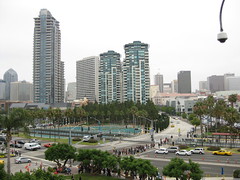 I figured there would be a line for Castle (especially since they had the entire cast present, and Nathan Fillion by himself is a big draw at Comic-Con). I wasn’t expecting it to run down the hall from the larger 6 rooms, out onto the balcony, zig-zag a bit under some tents, then head back along the convention center and wrap around the end, next to the gigantic air conditioners. At least the morning cloud cover hadn’t burned off yet, so we weren’t out in direct sun.

It took a long time before the convention started letting people in, but when we finally got to the front, I decided I’d head out and make Sunday the day I finally really explored the main floor, while Katie went in for Castle and then Merlin. 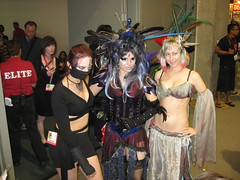 The staff directing traffic didn’t seem to know what to do with someone who left a line, though, and treated me as if I was trying to cut through it. This was the only time I ran into this kind of problem, fortunately. The rest of the time, traffic management was a lot better than it has been over the last few years! 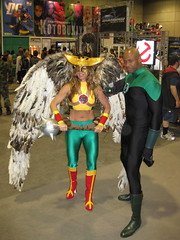 First I figured I’d try to pick up the No Ordinary Family T-Shirt for which I’d gotten a ticket at the preview the day before. Sometimes events will hand out freebies as you walk in, or will go down the aisles passing them out to the audience. Sometimes they’ll give you a ticket, which you then take to the “fulfillment room” to exchange for swag. It’s usually somewhere out of the way, and since actual programming has expanded to fill more of the rooms in the convention center itself, this year it was pushed out into a room in a small convention center at the Marriott hotel complex. The line for the fulfillment room stretched out the building, down the hill, and through a parking structure — and wasn’t moving, as far as I could see. I decided I didn’t want the shirt that much. (I went back later and there was no line at all. My best guess: it had only just opened, and the line was the backlog.) Once I shook that off, I headed to Artist’s Alley. I hadn’t quite made it there yet this year, probably because it was shoved all the way to the far end of the convention center. My goal: to find Flash artist Francis Manapul and ask him for a sketch. There were only about five or six fans ahead of me, but it takes time to do a sketch (unless you’re Sergio Aragonés), so it took the better part of an hour. 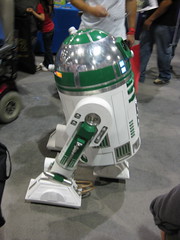 Around noon, I started my final exploration of the exhibit hall, the first systematic tour I’d attempted all weekend. The plan was that I would start at one end and work my way to the other, where I’d meet Katie and we’d head out for lunch and then home.

I checked out displays by artists and toy sellers, skimmed the movie and game studios, worked my way through the comic book publishers’ area, and finally decided to call it quits with a good fourth of the floor left to go, figuring I’d covered that part well enough on my earlier passes. 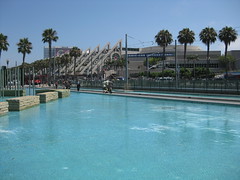 We ended up having lunch at Bareback Grill, the land of burgers and double entendres (yummy, but be sure to order your burger at least medium, even if nobody asks), then went to pick up the car. The structure was mostly automated, with a gate to get out, and there was no apparent way to trigger the gate without getting a ticket — and no way to get the ticket without feeding money into the machine. Money that we’d already paid ahead of time. Fortunately there was a button to call for assistance, and after we showed the guard our printed receipt we were let out with no further problems. Still, prepaid parking could have been handled much more smoothly. (Maybe by not including structures with this kind of payment system?)

Then a quick stop for coffee, and we were on the road, returning from another year at Comic-Con!

So, it took a lot longer than I intended, but this wraps up my coverage of this year’s Comic-Con International. Well, almost. We’ve both got notebooks with funny quotes, and we’ve only posted the ones from Leverage, “Twisting Genres” and “Once Upon a Time (Epic Fantasy)” so far, so you can expect a humor post or two at some point. Other than that, we’re done!

I hope you’ve enjoyed this series!