Last in the Comic Con preview series: Serenity, the feature-film spinoff of Firefly. Joss Whedon showed up, explained he wouldn’t waste any time since they didn’t have much, and that he “had something to show [us].”

Let me just say that, even if I hadn’t just finished watching Firefly, I’d be interested in seeing Serenity. If The Peacekeeper Wars closes the current chapter of Farscape, it looks like Serenity is designed to open a new chapter of Firefly.

After they ran the preview, he said he had something else to show us — “actually nine things.” The whole place screamed (the program had said only “surprise guests”), and out walked the entire main cast of the show! Like the Farscape group, these people are great fun to watch. (Edit: quotes are now available) Unfortunately, most of the audience questions were directed at Joss. It’s a comic book convention after all, and he writes comic books — plus there are lingering Buffy and Angel questions. To make sure they were included, Joss directed some questions of his own to the cast. Some of which were, shall we say, “interesting.”

As to the future of the Buffyverse: Angel, as a TV series, is dead. But it could eventually come back as a movie or TV movie. And while Buffy has run its course, there’s always the possibility of another spinoff (although clearly some people in the audience haven’t caught on to the fact that Eliza Dushku is busy right now). 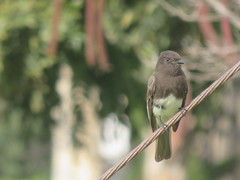